A downloadable game for Windows

Sneak into mansions, map them, steal all the loot and escape! Coffee-break turn-based stealth inspired by Looking Glass Studios' Thief games. The randomly-generated mansions are loosely based on Chinese courtyard houses, with symmetry, enclosed gardens, and a public-to-private gradient from the entrance northward.

When guards give chase, run diagonally around corners to gain distance (not unlike Pac-Man) or leap out a window.

Cobbled together out of spare parts for the 2016 Seven-day Roguelike Challenge. This post-7DRL release fixes a few bugs and quality-of-life features and adds visible guard orientations.

Version 6 (released 2018 January 2) fixes a couple of small bugs: a corner flanked by two windows was not getting correctly marked as visible, and investigating guards could step on top of the player if the player moved into their destination.

Version 9 (released 2020 August 19) is the same as version 8 but built with a newer version of Visual Studio (16.7.2) to see if that fixes problems; version 8 was flagged for a while as potential malware by Windows 10. The program isn't trying to do anything network-related, or read/write from the hard drive, so I'm not sure what it was seeing.

Hey there! version 2_8 got flagged as a Trojan by Windows Defender! 2_7 is fine though. I'm a big fan of this game :)

Yeah, I had that trouble as well after a Windows update. It would actually delete the executable about a minute after I compiled it in Visual Studio! Very annoying. Eventually it seemed to stop happening here. Not sure what they were seeing; it is a fairly simple program written with Microsoft's Visual C++ that doesn't do file or network I/O. I have uploaded a version 9 that is recompiled with the latest version of the compiler. Hopefully that allays Windows' suspicions.

What an ingenious game! I really enjoy it. It captures the fun and tension of LG's masterpiece indeed - that's what I call a well made "demake"!

Thanks! I've been a fan of the Looking Glass style of games since Ultima Underworld and on into Dishonored. I love the emphasis on creating an immersive atmosphere; on giving the player a bunch of fun systems to play with, even if they're not balanced; and the exploration of non-combat interactions with enemies.

There's an older ThiefRL I did that's available elsewhere (https://sites.google.com/site/mcneja/thiefrl) that is much more explicitly trying to ape Thief. It has a few more features (a friendly NPC, lock-picking, secret doors, extinguishable lights) but is a single hand-made map.

This game (ThiefRL2) was primarily an attempt to come up with a random map generator for that style of stealth gameplay in the space of a few days. It turned out pretty well; my wife still plays it. I'm working on some follow-ups.

Absolutely terrific game! Would you consider adding left-hand controls (eg: q w e a s d z x c)? I have an injury in my right arm which prevents me from really getting into playing this. Would love to do so if I could.

Glad you enjoyed it! I have added a left-hand control scheme, like you described. It's the version 8 download above.

Huzzah! Thank you so much for this! Have just been having a great time evading those guards. A really great game which I am already recommending to my friends :)

If I may ask, I am an aspiring developer (despite the the RSI - I often use Dragon & Caster voice recognition for coding) and would love a recommendation about a good tutorial (or a starting codebase) for learning to make Roguelikes. (I work mainly in Javascript or Python so far, have not yet ventured into C++, but do hope to study it someday.) I'm much more interested in learning to code directly than learning something like Unity.

Cool! Always great to have another Roguelike developer. It's a genre that really helps to focus development effort on gameplay, systems, and imagination.

I have been working on this stuff for decades so I'm not always sure what advice is relevant. But here's a shot at it.

Josh "Kyzrati" Ge is the developer of Cogmind and tireless pillar of the Roguelike-development sub-reddit. He wrote an article, How to Make a Roguelike, that has some good general advice.

Another thing they do on that sub-reddit is an annual communal working-through of the LibTCOD Roguelike tutorial. Roguelike developers being what they are, people will often work alongside in some new language they want to try. For instance, this one from Lokathor, in Rust. I've learned quite a bit from Lokathor's Haskell attempt from the year before the Rust one.

For Javascript there's rot.js, a Roguelike development toolkit that might be of interest, for educational purposes if nothing else.

After thinking a bit, here's some advice from me specifically:

Thank you James!  I will try the update.

I'm just wondering if there's a way to make it larger to see.

Thanks! Glad you enjoy it. For full screen are you thinking of something that scales up? Or changing the screen resolution? What resolution and screen size are you using?

Sorry for the delay! I had some time before starting this year's 7DRL so I put in a zoom feature on this game. You can press 2 to get 2X tile size, 3 for 3X, and 4 for 4X if you want them ridiculously large.

Great game, but I would like to continue from the same level I fail.

Sorry, I edited my post.  I meant is there a way to make the map larger?

I have problems viewing it, because it's so tiny. 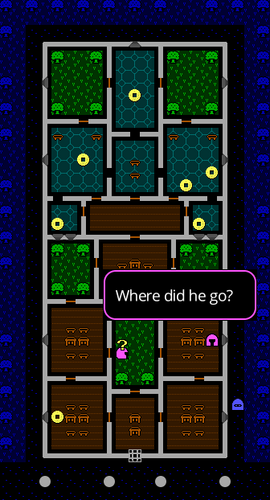 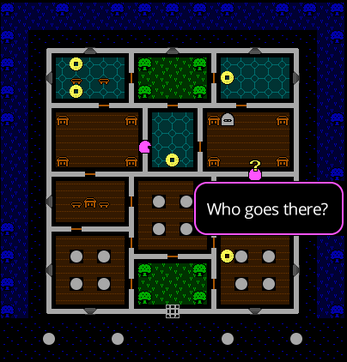